Garmins GFC 600 digital autopilot has been upgraded to feature new safety-enhancing capabilities, including Smart Rudder Bias for select piston twin-engine aircraft. Part of their AutonomiTM family of automated flight technologies, Smart Rudder Bias provides additional assistance against hazardous effects of a one-engine inoperative (OEI) event when appropriately equipped. It also provides pilots assistance in maintaining control of the aircraft while determining the next course of action, simultaneously reducing workload in a high-stress and time-critical flight environment.

“We are proud to be able to offer a new safety tool for twin-engine piston aircraft with the introduction of Smart Rudder Bias, making the GFC 600 digital autopilot the most advanced solution for this class of aircraft on the market today” said Carl Wolf, Garmin vice president of aviation sales and marketing. “With the introduction of Smart Rudder Bias technology, working together with the other Garmin systems onboard, pilots can react to an engine failure by quickly and accurately detecting the issue while simultaneously receiving automatic assistance applying the correct flight control input – providing an additional safety tool not seen before in twin-engine piston aircraft.”

Twin-engine aircraft inherently have aircraft controllability concerns in the event of an engine failure and pilots can expect a significant yaw toward the inoperative engine, resulting in an unstable aircraft state. In addition, due to a sideslip condition and a windmilling propeller, there can be decreased lift on the wing associated with the inoperative engine and simultaneously an increase in drag, all factors contributing to degraded performance and a critical loss in airspeed. Through close integration with multiple onboard Garmin systems, Smart Rudder Bias helps address these major concerns and immediately assists with controllability issues. This gives the pilot time to take the correct action required in order to better maintain positive aircraft control and help keep the aircraft in a safe flight condition.

When the aircraft reaches the manufacturer’s published minimum control speed (VMC) during the takeoff roll, Smart Rudder Bias is automatically armed. Smart Rudder Bias continuously monitors engine parameters using Engine Indication System (EIS) data displayed on a G500 TXi or G600 TXi flight display and activates when the system detects a predetermined power differential between each engine. Once activated, rudder force is dynamically adjusted to aid a pilot in providing enough force to the rudder to help control a sideslip. A yellow annunciator for the associated inoperative engine is conveniently displayed along with autopilot annunciations on the G500 TXi or G600 TXi flight display, helping the pilot identify the issue quicker. Smart Rudder Bias can be deactivated via a panel-mounted switch. 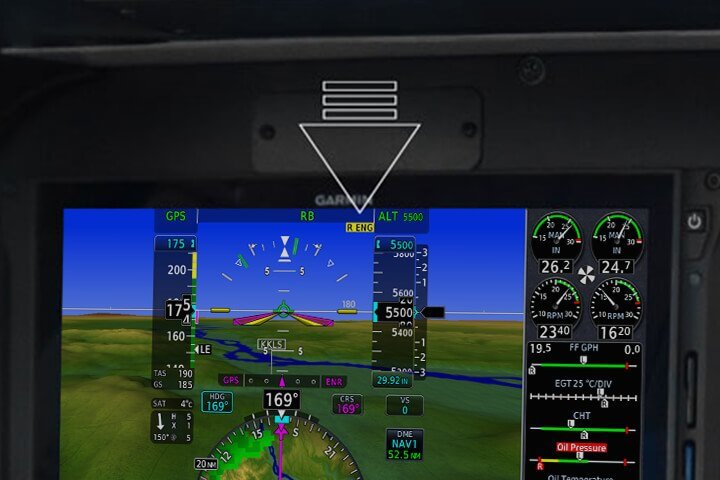 A yellow annunciator for the associated inoperative engine is conveniently displayed on the Garmin G500 TXi or G600 TXi flight display.

Garmin’s Electronic Stability and Protection (ESPTM) functions independently of the autopilot, working in the background to help pilots avoid inadvertent flight attitudes or bank angles and provides airspeed protection while the pilot is hand-flying the aircraft. Smart Rudder Bias applies enhanced ESP settings tailored to engine-out flight. Roll protection is modified to help correct for the roll tendency caused by the inoperative engine, while underspeed protection activates at a higher airspeed to help keep the aircraft away from the critical VMC speed and the associated loss of positive aircraft control.

The GFC 600 is also now certified on select Piper PA-31 aircraft, and an automatic yaw trim option is available. Similar to pitch trim, yaw trim allows for manual rudder trim control with the press of a button, and automatic control of the rudder trim when the GFC 600 autopilot or yaw damper is engaged.

Smart Rudder Bias requires a G500 TXi or G600 TXi configured as a primary flight display (PFD) with EIS, which can be shown as a strip on the G500 TXi or G600 TXi, or on a separate TXi display. Additionally, a GFC 600 digital autopilot with the yaw axis option must be installed. Initial certified aircraft with Smart Rudder Bias capability include the Beechcraft Baron 58 and 58A, as well as the Piper PA-31-300, PA-31-310, PA-31-325, and PA-31-325CR. Additional certifications of Smart Rudder Bias will be forthcoming.

For additional information about Smart Rudder Bias and the Garmin Autonomi family of automated flight technologies, don't hesitate to contact us on [email protected]