How the GFC 600 Saved My Bacon 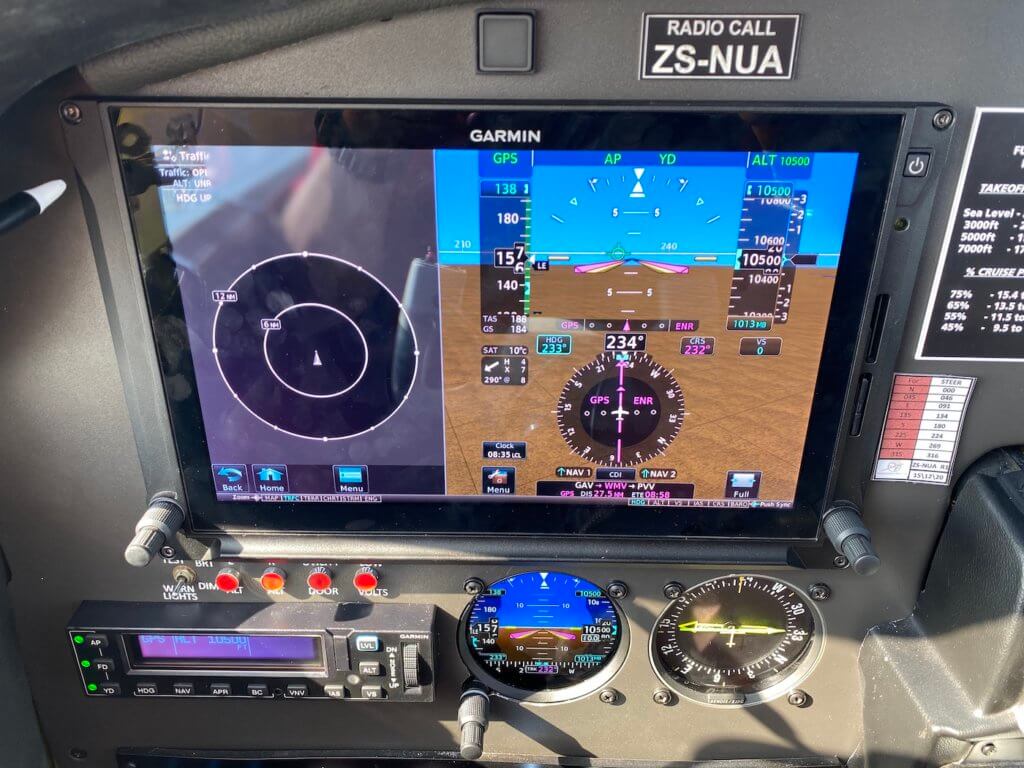 I often get asked, "Why is Avionics so expensive" or "What is the point in upgrading and old aircraft" or I get told "I don't want to over capitalise on my aircraft". At the end of the day, I always ask one question. "What do you use your aircraft for and what type of flying do you do?" The answers always differ and the beauty of the new Avionics available in the market today, make customising a solution that meets the mission very easy, and can also be tailored to budgets.

Avionics has a very serious role to play in how we navigate the skies today and helps pilots with situational awareness, and to be honest, leads the Aviation Industry in all aspects. It's become the "brain" of what we fly. Legislation tries to keep up with the new capabilities being launched, but as soon as one approval comes, so the software/hardware has grown to new abilities.

When we bought our Baron 58 3 years ago, it was with the vision to have an aircraft to demonstrate Garmin's latest and greatest technology. It's one thing playing with a screen on a bench or seeing a video on how the new Autopilot works, but to fly and experience it in "real life" is something else. Never did we imagine we would get to see how it saves lives in "real life".

One of the most important things for me being the pilot of this aircraft was to have accurate engine information, good situational awareness, good IFR capability as well as a reliable Autopilot. Especially considering we were going to use the aircraft as a "we come to you" service too. We opted for the Garmin GFC 600 Autopilot during this process as it had a Yaw Damper, which is essential for passengers in the back of a twin, VNAV and IAS hold.

Late January I needed to go help a client with his Avionics in Mossel Bay. After an early departure, 3 1/2 hours later I landed and parked on the ramp. We spent most of the morning sorting out some software issues and the sun was beating down like we were in the middle of a desert. We had a quick bite to eat when we finished, I fueled and was on my way back to Lanseria. This is where things got tricky to say the least.

I departed runway 09 straight towards the coastline, called George Tower who then routed me out to sea due to other IFR arrivals. They kept me at 2500ft and once I was at least 15nm out over the bay they cleared me direct to OKSOP, and RNAV intersection, and cleared me for the climb to FL115. I had the autopilot engaged with the yaw damper at this point so I pressed NAV to couple to the GPS route and pre-selected FL115 for the climb. I selected an IAS hold of 138 kts as this is the Barons cruise Climb speed. The aircraft rolled its wings left, pulled the nose up and started the turn and climb.

As I looked to the co-pilot seat to pickup my Flightplan paperwork, I heard a sudden change to the sound of the engines and felt a sudden loss of power. Now the training kicks in. Having only 50 odd hours on twins, I am not "highly" experienced in this type of situation. After test flying various aircraft post maintenance in my career and having my fair share of emergencies, this was my first one, on my own, in my own aircraft.

I followed the drill, Gear Up, Flaps Up, Identify, dead leg dead engine, wait, what..... Well this was different. I confirmed Gear and Flaps were up but the rudder pedals were not fighting me at all. The GFC 600 Yaw Damper took the Yaw in its stride and held the aircraft straight on its own. A little disconcerting considering this is not what I was taught.

Be that as it may, I looked at the EIS and realised I had no fuel flow or fuel pressure on the Left Engine. That must be my problem engine. I disconnected the Autopilot to confirm this and the Aircraft Yawed to the left like I was expecting. A quick engagement of the autopilot took care of the yaw again and I selected IAS HOLD at Blue line +10kts. Now I knew the aircraft would not stall, it was flying straight and I can diagnose the engine issue.

I tried the electric fuel pump and the engine came back to life but VERY rough. I confirmed on the EGT's that 2 cylinders were not firing. It was so rough at that point that I decided to rather shut it down completely and feather the prop.

Now the aircraft was climbing, getting me 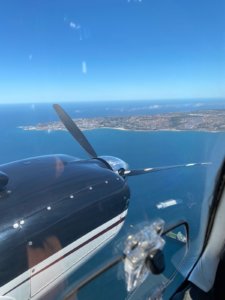 height, flying straight so I decided to declare the emergency with George and route back to Mossel Bay. Everything went smoothly from there and I landed without incident.

On reflection of what had just happened, I quickly realised what an asset it was to have those avionics during this sequence of events. The Autopilot took care of the massive yawing action, maintained the speed above Blue Line and with the Right engine at full power, controlled the speed to allow me to climb, gaining valuable altitude in an emergency situation, especially over water. The Engine Management System helped in a huge way in diagnosing and giving me the information I needed to make an informed decision to feather and land. The rest of the equipment was brilliant in helping me with my situational awareness and getting me back to Mossel Bay in the shortest time possible, considering I've never flown here before. I had woken up at 5 am, driven to Lanseria, Fueled, Flown 3 1/2 hrs to Mosel Bay, worked in the scorching sun for at least two hours, fueled again, had a quick bite to eat and taken off again for another 3 1/2 hrs home. I was tired and slightly fatigued from the sun so to have these systems take over and look after me like they did was a welcomed relief. I've always said it would never happen to me but it did and it can happen at any time. 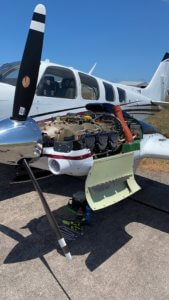 The following day my AMO had flown down to come and change the mechanical Fuel pump on the engine so I could get home for the weekend. This turned into an extremely long day as we had no hanger to work in so the pump had to be changed in the baking sun. When the fuel pump was removed we noticed we had a complete falure of the vanes and all the filters in the system were now full of debris. We cleaned all the filters and flushed the fuel system. Debris from the pump was blocking the fuel nozels, hence why I saw what I did on the EGT's tha day before when I decided to shut down and Feather.

A few ground runs and a few fuel pressure adjustments later, she was purring like a kitten once more. Now later in the afternoon with the sun already starting to creep down, I fueled and it was time to go home.

I took off on 09 again and back out to sea for the climb and routing back to Lanseria.

This turned into quite a trip and having being in the sun the entire day, I was sunburnt and tired.

I levelled off at FL115 and sat back and finally for the first time on that day could actually relax a little. I was listening to the various communications with Cape Town and quickly realised that the weather on route that was planned to be overcast was quickly turning into thunderstorms. I was still a good 30 minutes from them.

I used the onboard radar and Storm Scope to monitor what was happening in the distance. There seemed to be quite a big break in between the two cells and I headed in that direction. I was met with lighting off to the left and right and some rain through the middle but nothing too severe. Popped out the other side to a beautiful sunset.

The rest of the flight home was uneventful until the decent to Lanseria. Just before TOD, the whole sequence of events from the day before happened all over again. Loss of Power on the left engine, loss of fuel flow, etc. This time when I put the electric pump on the engine came back to life and ran smooth so I continued the decent and landed at Lanseria. Again, the GFC 600 took all the pressure out of the situation and held the aircraft steady while I got the engine running again.

After putting the Baron away in the hanger that night, I considered the events of the previous two days and I am 100% convinced things would have ended differently if I did not have all the information at hand to make my decisions. The GFC 600 was a co-pilot like no other and kept me safe the entire time and ensured I was home with my Family that Friday night.