Ever wondered how your Gyro vacuum works? Here’s a very simple flow diagram of its operation. 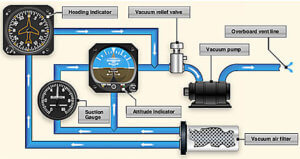 In simple, The engine driven pump sucks air through the system. The air flows in from the inlet filter, normally located under your instrument panel, directly into the inlet ports on your Artificial Horizon and Directional Gyro. The Suction Gauge is fitted between the Outlet and Inlet ports to give a differential pressure measured in Inches of Mercury. The Outlet sides of the Two Gyro’s are connected to a vacuum regulator which is used to regulate the amount of airflow measured on the suction gauge. Finally into the pumps vacuum port and the outlet port is vented under the cowling. In a turbine situation its very similar but vacuum is generated by means of Bleed Air. This is a pressure which is run through a ventury, creating suction and replacing the vacuum pump.   Your optimal range on a Suction system should be between 4,5Hg and 5,5Hg. this can be regulated with the regulator. If you find your suction is acting like a second RPM Indicator and is influenced by RPM change its a good time to have that regulator removed and overhauled or replaced. Its imperative for longer Gyro life that the Inlet filter gets checked and serviced at every MPI. You can think of it like your engine air filter. You wouldn’t want foreign objects entering into the engine as it reduces engine life so the same happens when the inlet filter is dirty. The average rotor speed is around 18 000 RPM so when that grit gets in the bearings it does damage and quickly.

Wondered if your gyro’s are still in good health?

There is a simple indication that will tell you if they tired or not. When the engine starts the Attitude gyro should “Shimmy” itself level. If it lags and lays around and takes it time to errect properly, its time to get it seen to. You will probably find that it will indicate correctly in flight but I wouldn’t want to be you in an IFR situation when it does decide to go wrong. The Directional Indicator is slightly different. The only way to tell without opening it up on the bench is to listen after shutdown for a whining / Grinding sound from its rotor when it runs down. Alternatively it will start drifting in excess of 5 degrees every 10 minutes. Then you know its time to come out for overhaul. If you unsure, give us a call and we will gladly take a look and give you a free assessment and quote. Happy Flying.