The GFC 500 and GFC 600 deliver superior in-flight characteristics, self-monitoring capabilities and minimal maintenance needs when compared to older generation autopilot systems. The GFC 500 is intended for single-engine piston aircraft, while the GFC 600 is intended for high performance piston single/twin-engine and turbine aircraft that have a wide range of speed and performance characteristics.

Aircraft models to soon be approved for the GFC 500 autopilot include:

Aircraft models to soon be approved for the GFC 600 autopilot include:

With the approval of the GFC 600 autopilot in the TBM 700/850, new features will be introduced to GFC 600. Low Bank mode helps increase passenger comfort by automatically lowering the autopilot roll limit at higher altitudes. A separate switch may also be used by the pilot to activate/deactivate Low Bank Mode at any altitude. Additionally, GFC 600-equipped TBM 700/850 aircraft will also feature Emergency Descent Mode (EDM). In the event an aircraft loses cabin pressurization, EDM is capable of automatically descending the aircraft to a preset altitude without pilot intervention to help avert hypoxic situations. In addition to the GFC 600 autopilot, a G600 TXi flight display is also required to receive these new autopilot features in the TBM 700/850.

The GFC 500 autopilot will soon be available for the Cessna 182RG in August. The GFC 600 autopilot in the TBM 700/850 and PA-46 310P/350P JetPROP is also expected to be available in August. Garmin continue's to broaden the aircraft approval list for the GFC 600 and GFC 500 autopilots. To view the most up-to-date aircraft STC list, or to view a list of certification programs that they are expected to begin in the next 12-months, visit www.garmin.com/GFC500 or www.garmin.com/GFC600.

“TeamX, our dedicated team of passionate pilots and experimental aircraft builders, continue to roll out additional updates that add more capability to aircraft with a new or existing G5 electronic flight instrument or G3X Touch flight display,” said Carl Wolf, Garmin vice president of aviation sales and marketing. “Garmin remains committed to offering value-minded solutions that give pilots even more features and flexibility when considering an avionics installation, and we are thrilled to give thousands of customers more reasons to pursue a flight display upgrade.”

The G5 electronic flight instrument will soon be capable of displaying outside air temperature (OAT) and true airspeed (TAS) using a temperature probe and Garmin adapter. Similar to other Garmin products, OAT is displayed along the bottom of the airspeed indicator on the G5, while TAS is displayed on the top. When G5 is configured as a directional gyro (DG) or horizontal situation indicator (HSI), wind speed and direction is also displayed in the upper left corner of the G5. For standalone G5 installations, additional hardware is required to display OAT and TAS. New for experimental aircraft, G5 can also display density altitude below the altimeter while the aircraft is on the ground.

The G5 electronic flight instrument for certified aircraft can soon be paired with dual digital Garmin navigation sources, such as a GTN 650/750 or GPS 175/GNC 355/GNX 375, and manually switch between the sources on the G5. For VFR installations, pilots can also use a Garmin portable to display lateral course deviation information on the G5. 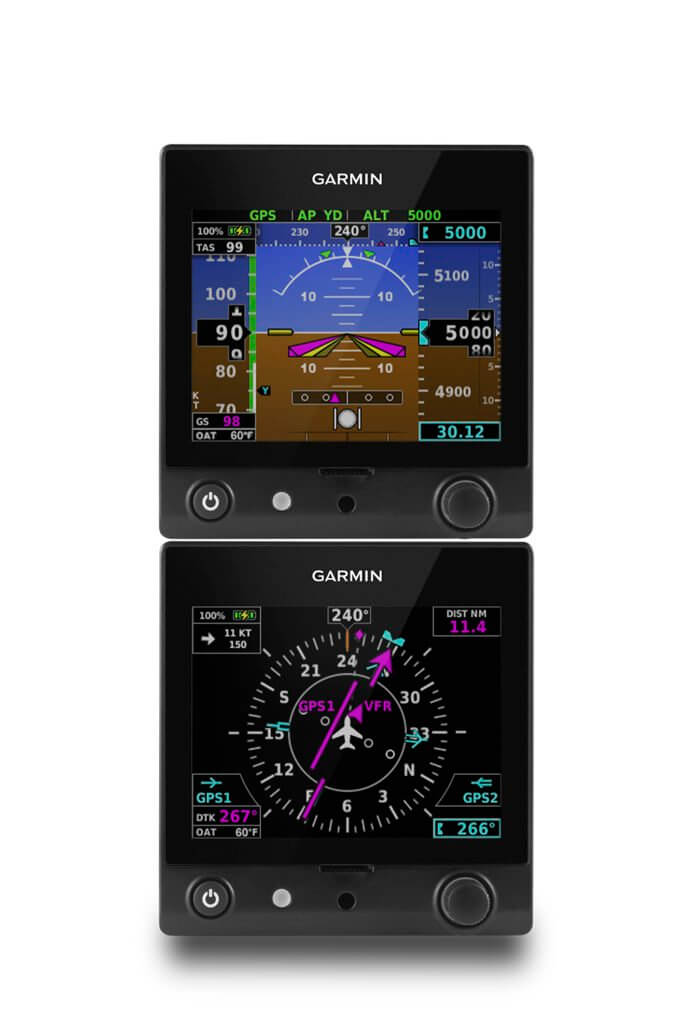 Pilots are provided with a comprehensive, in-depth look at engine performance and trend data with G3X Touch for experimental aircraft, which includes built-in engine and flight data logging. Aircraft performance, engine data and any exceedances that may occur are automatically stored on an SD card in the display. In addition to data logging, pilots can view real-time detailed engine information from
G3X Touch within the Garmin Pilot app. This information is sent wirelessly from G3X Touch to Garmin Pilot. Pilot-configurable exceedances can also be set within the Garmin Pilot app.

G3X Touch for experimental aircraft is also adding a new display configuration – a standalone Multifunction Display (MFD) with an optional Engine Indication System (EIS). This display configuration is a natural addition to thousands of aircraft with a single or dual G5 installation. The G3X Touch is also capable of displaying maps, charts, weather, traffic, terrain and more, alongside engine information.

New software and optional hardware for the G5 electronic flight instrument for all customers and G3X Touch for experimental aircraft is expected to be available in August.

Garmin are excited to announce the GSB 15, a small, lightweight USB charger designed for a wide range of aircraft. A single GSB 15 contains two USB ports and supports simultaneous 18W (up to 3A) high-speed charging. The GSB 15 has received Federal Aviation Administration (FAA) certification, as well as European approval, and is expected to be available through Garmin Authorized Dealers next week.

“Tablets and mobile devices have become a mainstay in the cockpit and it’s essential to ensure they’re powered and available throughout an entire flight,” said Carl Wolf, Garmin vice president of aviation sales and marketing. “The GSB 15 is the smallest installed dual-port USB charger ever designed for aircraft use that allows owners and operators to easily and economically add USB power capability to their aircraft.”

Designed specifically for aircraft installations, the GSB 15 includes two powerful 18W (up to 3A) USB Type-A charging ports that allow pilots and passengers to charge tablets and mobile devices in the cockpit and throughout the cabin in the aircraft. A single GSB 15 is capable of charging two full-size tablets while using them at full backlight. Optional halo lighting around the exterior of the ports allows pilots and passengers to connect to the GSB 15 easily during nighttime conditions.

The GSB 15 has received FAA certification, as well as European approval and is expected to begin shipping next week.

This site uses Akismet to reduce spam. Learn how your comment data is processed.